These prawn-topped lentil fritters are beloved throughout Sri Lanka, managing to bring together locals across ethnicities, religion and class.

As the train pulled into Peradeniya Junction station in central Sri Lanka, the man sitting opposite me leapt out of his seat and leaned out of the window, placing his thumb and forefinger in his mouth and whistling loudly. A vade seller soon appeared outside, removed a basket from the top of his head and handed it to the passenger. The man quickly pulled out a fragrant fritter along with a small bag of fiery sambol, leaving money behind, and then passed the basket to other hungry passengers, who did the same before returning the basket back to the seller through the window.

As the train chugged away, everyone settled back in to their seats and contentedly crunched on what I’d later learn were isso vade: lentil patties topped with fresh prawns and deep-fried to create one of the most delicious street foods you could ever find on an island.

Isso (prawn) vade (pattie) are beloved throughout Sri Lanka, and their popularity can perhaps be attributed to their deeply familiar and simple ingredients: lentils and prawns, along with onions and curry leaves. Topped with a spicy sambol – made of chopped onions, tomatoes, green chillies and lime juice – plus chilli sauce for extra punch, each fritter has the perfect balance of crispy texture, zesty aroma and spicy flavour. And at Rs 50 to 70 (12p to 18p) each, they are an inexpensive, tasty treat for the masses.

The most famous isso vade are sold from carts along Galle Face, a seafront promenade in Colombo. Each evening, when the gentle breeze, which has travelled for miles over the Indian Ocean, finally encounters land and cools the city, thousands gather here to spend time with family and friends. They walk up and down the promenade, sizing up each isso vade seller to decide which one has the best offering – usually the one with the largest crowd. 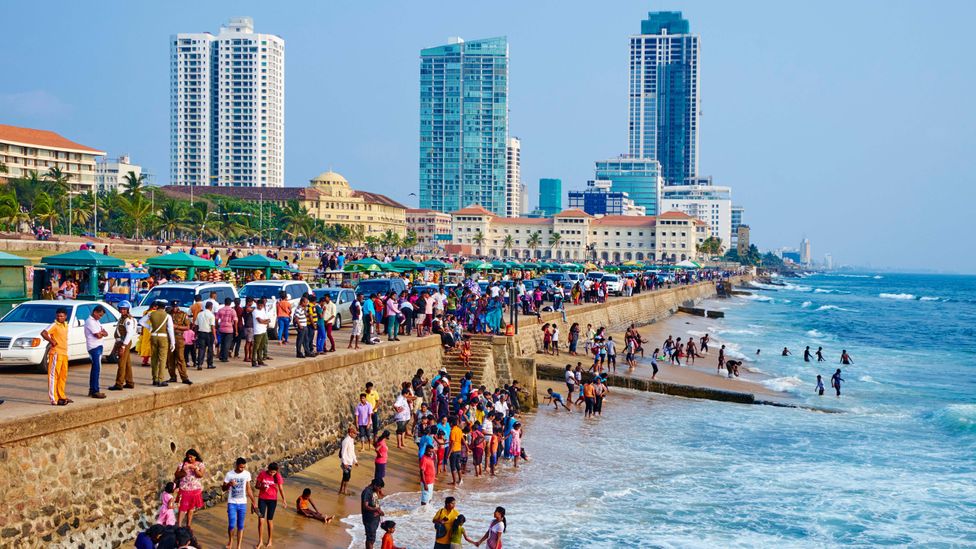 The most famous isso vade are sold from carts along Galle Face in Colombo (Credit: Tuul and Bruno Morandi/Alamy)

Rashintha Rodrigo, co-owner of UK’s Sri Lankan street food restaurant chain The Coconut Tree, reminisces about eating isso vade on Galle Face. “I’d go to the kite festivals on Galle Face with friends, and we always ate isso vade together. No matter how much you ate them, they never lost their novelty. I think that’s because no one makes isso vade at home. They are in every sense, a street food; you only buy them outside.”

Although isso vade is now sold at every beach, seafront, train station or public space where people might gather, the much-loved street food has humble beginnings that tell a larger story about Sri Lanka’s history and culinary culture.

According to Chef Publis Silva of Mount Lavinia Hotel, lentil vade (sans prawns) were introduced to Sri Lanka from southern India. This, he says, likely happened during the time Sri Lanka was under British rule, between 1796 and 1948, and South Indian labourers were brought over to work on tea plantations. These workers settled in the mountainous Central Highlands and established small settlements that would later be identified as the Hill Country Tamil community.

Sri Lankan food blogger Anoma Wijetunga agrees. Vade, she explained, is traditionally made of ground masoor dal (red lentils), which doesn’t grow in Sri Lanka but in India; therefore, this is a food which most certainly crossed the ocean to arrive in Sri Lanka. 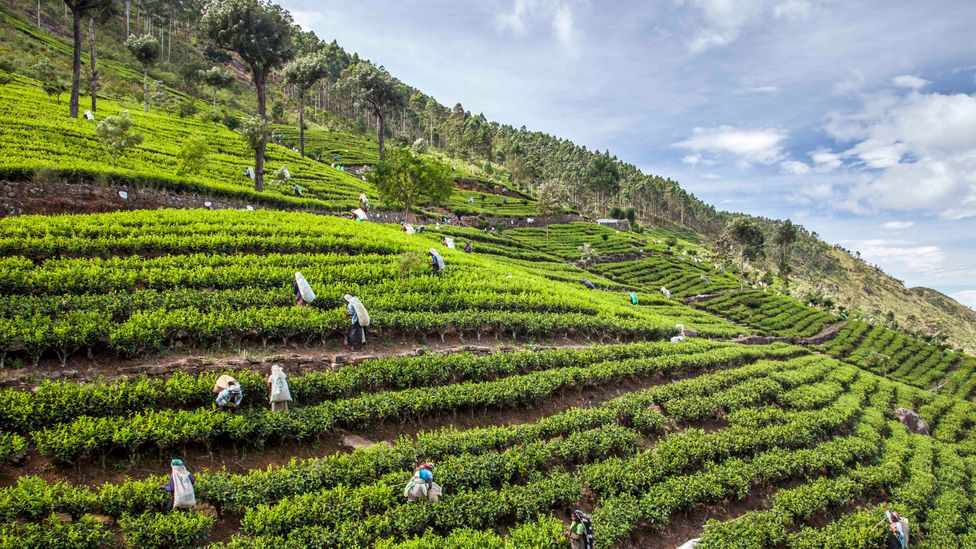 “Workers who arrived from South India only ever used dal when making vade,” Wijetunga said. “They never use prawns. And that is how this community still makes them. As for how they spread to the rest of the island, I think it might have been when the men folk began selling them on the trains. Of course, that too is something that came over from India and still happens there to this day.”

Jesmin Arumugam, who grew up in the Hill Country and is central team manager at The Tea Leaf Trust, an educational organisation for young people in Sri Lankan tea estates, remembers her mother making vade at home during every Hindu festival over the years. “The times that she made isso vade, we’d always eat it with a green chilli chutney and a cup of very sweet milk tea,” she reminisced fondly.

According to Silva, however, what makes isso vade unique to Sri Lanka is the addition of green chillies and curry leaves (karapincha) into the ground lentil mix. Although karapincha grows in India, Sri Lankan cookery incorporates the leaves into almost every savoury dish, creating a distinctive, zesty aroma. The addition of freshwater prawns to the vade also made sense. Although they are less common than sea water prawns, they are thicker and withstand deep frying much better. A prawn topping also made the vade more visually appealing than a plain lentil patty. The use of chillies, said Silva, is mostly for colour.

“Sri Lankans have always adapted every foreign food that was ever introduced to the island. We like to stamp our own identity on them,” he said. “And we are a nation that eats with our hands, so the gritty texture of isso vade [from the lentils] is very pleasing to Sri Lankans. We also have a culture of sitting outside for early evening chats with friends and neighbours, and vade gave us something to chew on as we did so.” 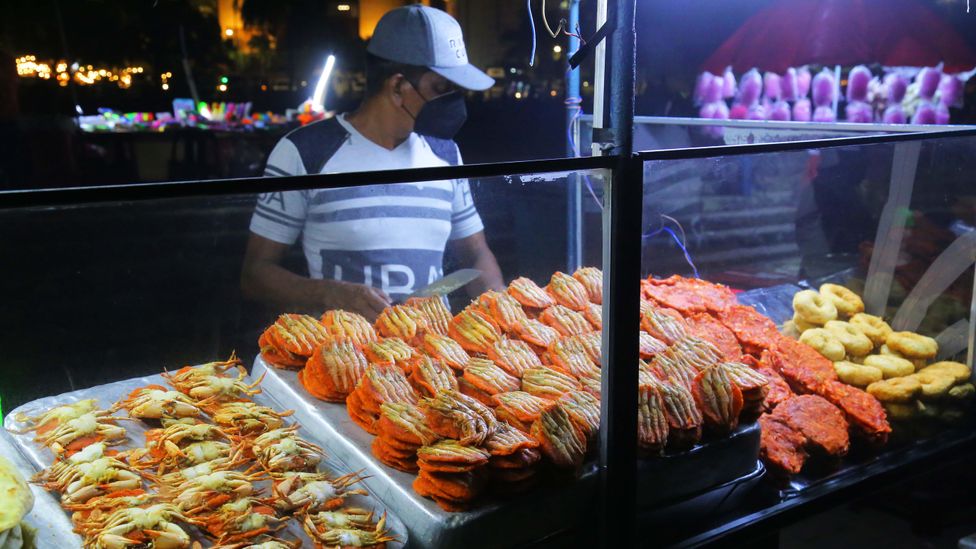 Many street food vendors are struggling due to the soaring price of ingredients (Credit: Sisira Wijetunga)

However, Sri Lanka is in the midst of an economic crisis. With food prices soaring and sellers unable to pass on the costs to customers who will not pay more than a few rupees for street food, many isso vade sellers have seen their profits decrease. While most will turn to alternative means of income, some vow to remain.

Mani, a vade seller on Galle Face, has watched the transformation of Colombo from small city to restless capital from behind his street food cart since 1965. “I was just 13 years old when I started making isso vade at home and selling them to support my family. Now, once expenses are considered, we make only a small profit each month. But I would never consider another trade because if I’m not on Galle Face, my customers will not eat anywhere else. This is something to be proud of,” he told me.

I myself have beloved memories of biting through the crispy exterior, the soft, gritty centre tasting of well-seasoned lentils with the delectable flavour of chopped onions, curry leaves and savoury prawns fried in their shells. It’s incredible to think that vade, in its original form, crossed an ocean with an immigrant community to arrive on this tiny island far from home. No one could have known that this spicy snack would go on to unite Sri Lankans across ethnicities, religion and class as they sit with friends to watch the sun go down.

If this tasty snack can’t survive the enomic crisis, it is not merely a street food and livelihoods that are threatened, but two centuries of history will be lost alongside it. 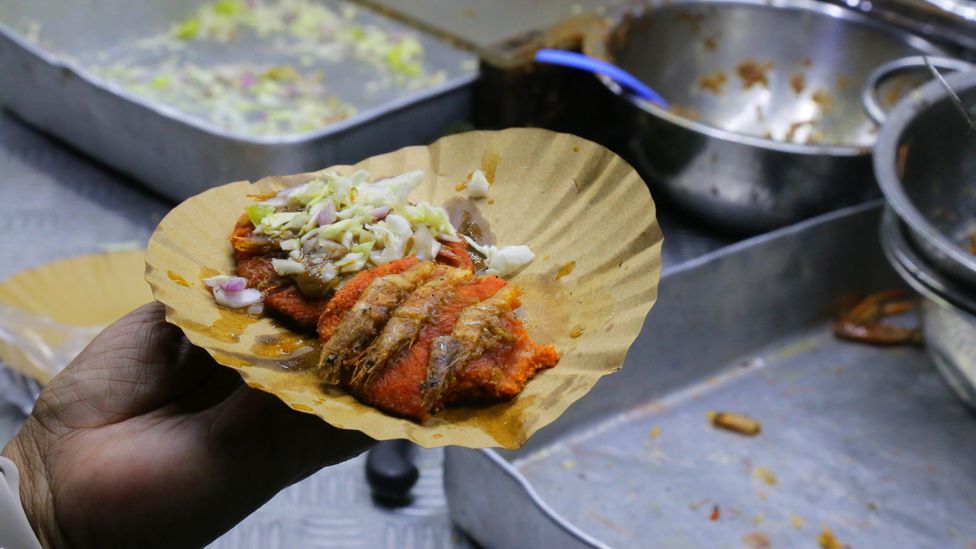 The patties are always topped with three freshwater prawns and served with a spicy sambol (Credit: Sisira Wijetunga)

Lebanon’s Currency Crisis Paves The Way To A New Future

A 90,000 mn Treasury bill auction to be held next week